Three Reasons Why Political Dynasties Persist in the Philippines 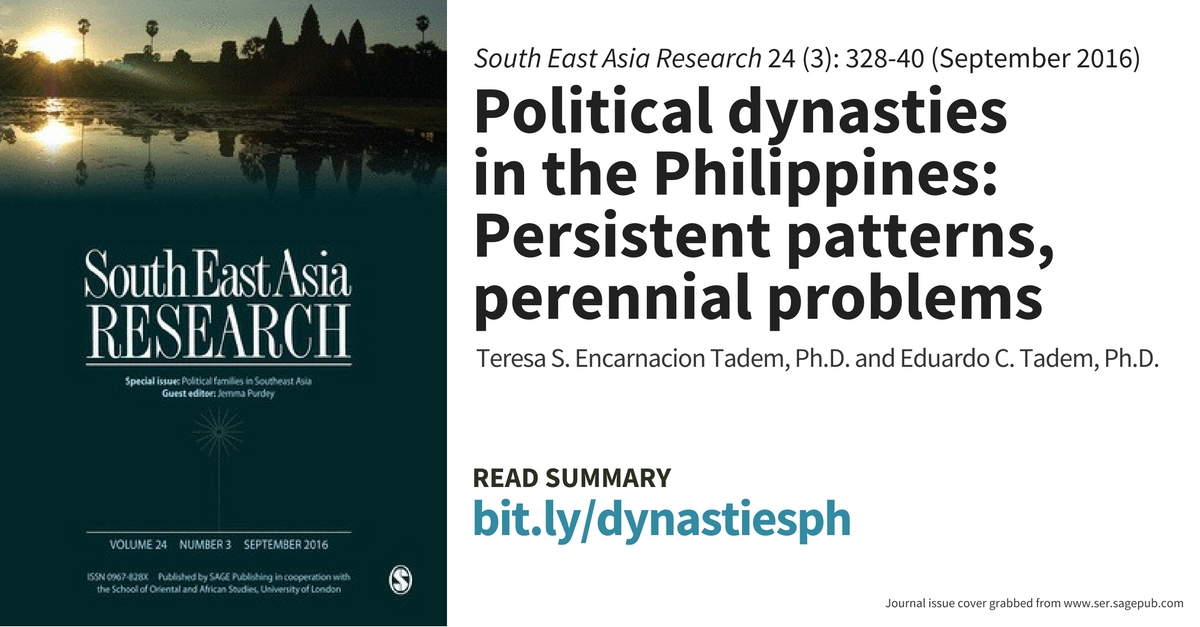 In “Political dynasties in the Philippines: Persistent patterns, perennial problems,” South East Asia Research, Vol. 24 (3), 2016, Dr. Eduardo C. Tadem and Dr. Teresa S. Encarnacion Tadem, “examine[s] the general nature of Philippine political dynasties, the reasons for their continuing existence and their adverse impact on the country” (328). It is noted that “following independence in 1946, the story of the political family is one of remarkable resilience facilitated by a combination of militarisation and economic diversification” (330).

“This problem emanates basically from three factors: (1) the political and socio-economic foundations upon which political dynasties are built; 2) the inability to effectively implement Philippine constitutional provisions by enacting an enabling law; and 3) the weakness of potential countervailing forces that would challenge political dynasties” (329). “The resilience of the established political dynasties across the decades was in great part due to their ability to diversify economically, enabling them to adapt and hold on to their political power. At the same time, for new dynasties, the accumulation of a diversity of economic interests means that a small dynasty can emerge from even the poorest provinces of the country” (331).

The authors further argue that this phenomenon has had grave effects on the country as “the persistence of political dynasties in the Philippines is acknowledged as bringing adverse effects on the country including the perpetuation of poverty and underdevelopment, the propagation of political and socio-economic inequality and the prevalence of massive corruption” (332).

Political dynasties have faced challenges but have so far survived them. As the authors write, “potential challenges to the political dynasty, including individual candidates, remain the exception rather than the rule and have been shown to be unsustainable. Aggravating this situation is the inability of social movements and civil society to challenge the power base of these political families or to affect public opinion” (340).

In the end, “the consequence of this is a dysfunctional democracy and electoral system in which the political hegemony of elite families endures, the majority of Filipinos remain marginalised and disempowered and wealth and power is increasingly in the hands of the few” (340) .

The full article may be purchased at the website of South East Asia Research, which is published by the School of Oriental and African Studies, University of London.

Dr. Eduardo C. Tadem, Professorial Lecturer at the UP Asian Center, specializes in rural development, agrarian reform, and the peasantry, among other topics. He handles graduate courses on Southeast Asia and on Theories and Perspectives in Area Studies. His most recent publication is “Technocracy and the Peasantry: Martial Law Development Paradigms and Philippine Agrarian Reform,” 2015. Journal of Contemporary Asia, Vol. 45. No.3.  He has a PhD in Southeast Asian Studies from the National University of Singapore. View his full faculty profile.

The UP Asian Center offers M.A. programs in Asian Studies with four fields of specialization: Northeast Asia, Southeast Asia, South Asia, and West Asia. The Center also has an M.A. program in Philippine Studies that allows students to major in Philippine society and culture, Philippine foreign relations, or Philippine development studies. The Center offers a Ph.D. program in Philippine Studies in conjunction with the College of Arts and Letters and the College of Social Sciences and Philosophy. Get an overview of these programs. The Asian Center also houses a peer-reviewed, open-access journal, Asian Studies: Journal of Critical Perspectives on Asia. It has published several books and monographs, and hosts or organizes various lectures and conferences.