The Political Economy of Korean Blockbusters, Then and Now | A Lecture @ UP CMC 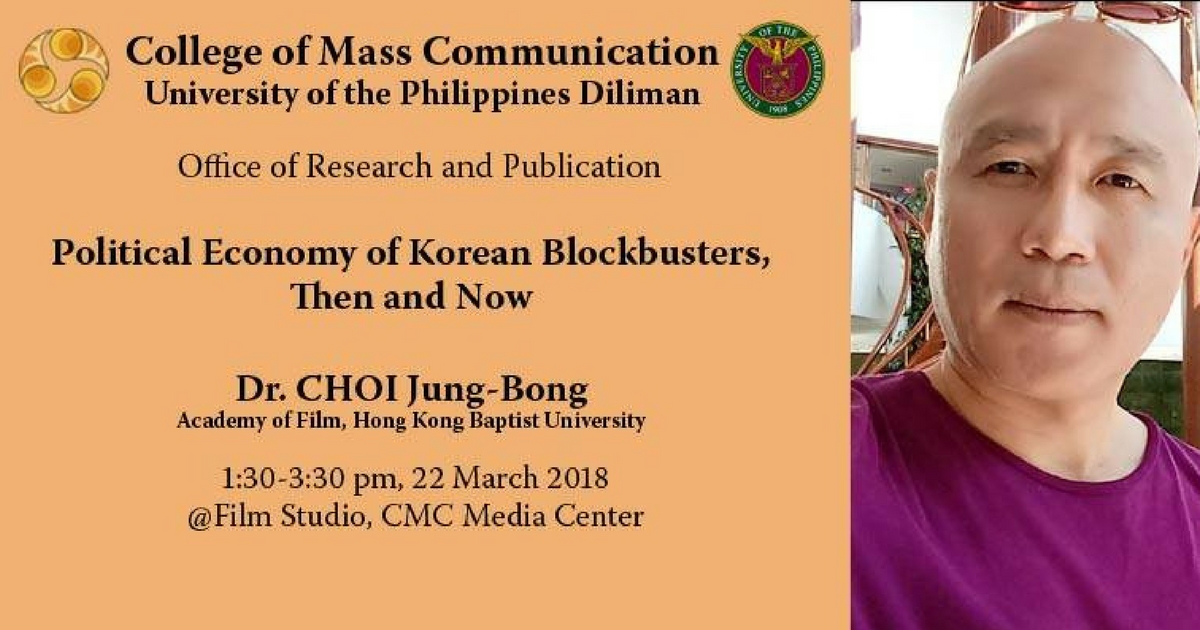 Event graphic from the UP College of Mass Communications

Korean Blockbusters have emerged from the late 1990s amid a robust industrialization of movie business by Korean conglomerates. At the same time, its development was inspired by cultural nationalism to fight off Hollywood’s foray into domestic markets under the aegis of Free Trade Agreement (FTA). Since then, Korean Blockbusters have undergone multiple structural shifts in theme, style, impetus, key agent and domestic/international reception. This talk will unpack the pattern by which Korean blockbuster movies have transformed in the past twenty years. In so doing, it will ascertain the distinct feature of Korean blockbusters in comparison with those of Hollywood, and how this unique characters have shaped in response to changing political and economic environments in and around Korea.

JungBong Choi is Associate Professor in the Academy of Film at Hong Kong Baptist University (HKBU), where he teaches theories of cultural globalization, transnational media/cinema/popular cultures of East Asia, and the political economy of postcolonial and neoliberal discourses. He previously taught at New York University (NYU) and University of California (UCSB). He authored Digitalization of Television in Japan: State, Economy, and Discourse (2008) and The Political Economy of K-pop Globalization: a Fanthropology (2014); edited two journal special issues: Unsettling the National in Korean Cinema for the Journal of Korean Studies (2011) and Of Transnational-Korean Cinematrix (2012); and co-edited two volumes: Globalization, Television and Japan (2010) and K-pop: the International Rise of the Korean Music Industry (2014).

The Asian Center offers M.A. degrees in Asian Studies with four fields of specialization: Northeast Asia, Southeast Asia, South Asia, and West Asia. The Center also has an M.A. program in Philippine Studies that allows students to major in Philippine society and culture, Philippine foreign relations, or Philippine development studies. The Center offers a Ph.D. program in Philippine Studies in conjunction with the College of Arts and Letters and the College of Social Sciences and Philosophy. For an overview of these graduate programs, click here. The Asian Center also publishes Asian Studies: Journal of Critical Perspectives on Asia, the latest issue of which can be downloaded at the journal's website. For other news and upcoming events at the Asian Center, click here.